A downloadable game for Windows and Linux

What if the classic arcade titles Berzerk/Frenzy had a sequel on the PS1? What if incorporated roguelike elements in its design? Animozity is the product of that thought experiment, made for both Retro-Jam (1st place) and 7DRL.

Travel through the rusted metal corridors and destroy any robots that try to stop you. Level up and pick perks to increase your chances of survival, but watch out as every perk comes with a negative side-effect too. Picking the right perks and weapons that work well together is the key to destroying everything in your way.

Created with the FTEQW engine, most assets created during jam period with the exception of some sounds that were lifted from my other games. The game's source code is in the game/src directory, needs FTE QuakeC Compiler (fteqcc) to compile, I license it under the MIT license.

Zip contains both Windows and Linux (amd64) binaries, to run it on Linux you might need to `chmod +x ./fteqw64` first

For ps1 style affine texturing, you can use console to input `gl_affinemodels 1`

Extract the zip before trying to run, if you're on linux then remember to chmod +x ./fteqw64

DUDE! This game was such a blast. This feels like with some more content it could become one of the classics of arena based shooters like this.

The shooting felt great, from the blast effects, the robot death animations (it's really hard to make shooting a robot feel satisfying in a game) and the sounds it all worked together really well.

The music, while there's only one track it worked great for this type of game.

I played until I reached level 7 (on Normal) since by then I'd reached max level.

The regeneration power is a bit OP, after I got it I could choose stuff like less max hp and shields and no health drops without ever having to worry much. This might not be as much of a problem one higher difficulties of course =P

If you ever develop this or something similar into a bigger game I'd recommend focusing a lot of effort on increasing the level variety. The rooms looked fairly varied visually but gameplaywise most of them were just an open field. More room varieties with the walls and pillars would be nice. Floor hazards perhaps? Both of the spikes and mines type but also just holes that you (and enemies can be slung into by knockback. And on the same note, spikes on walls or something like that for the same reason.

Another thing when it came to the level design, while you could walk back the way you came from, it took until floor 6 until I ever ended up in a dead end and had to do that so it felt like a bit of a wasted feature... not that this is a game about exploration of course =P

Great work! This earned it's 1st place win for sure.

Hi there Shp! Just wondering what your username was, on the discord server, so we could tag you in the hall of fame channel. If you're not there that's ok! just contact reply me here with anything you might want to plug, like a social media etc. Congratulations on winning! - Mochii

Thank you and thanks for organizing a fun jam! I don't use Discord, you can plug just my twitter @Shpuld and my itch page :)

Most underrated game of the Jam. So glad it won!

This feels like the love child of the arcade game Alien Syndrome and Loaded on the PS1! ^_^ 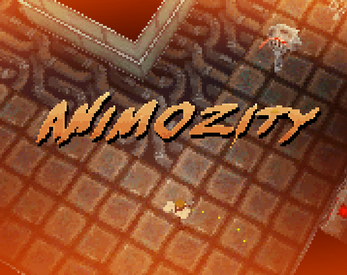